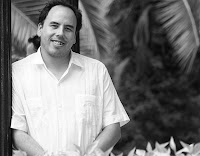 Paul 'Dr. Pauly' McGuire is a writer originally from New York City. He has lived in Las Vegas, NV on and off since 2005 but currently resides in Los Angeles, CA.

McGuire authors the Tao of Poker, Tao of Pauly, and Tao of Bacon. He is the founder of Ocelot Sports. He is also the editor and founder of Coventry (a music blog) and the online literary magazine Truckin'. He also launched Tao of Fear, which is an interesting mix fear mongering and finance.

Lost Vegas: The Redneck Riviera, Existentialist Conversations with Strippers, and the World Series of Poker was published in June 2010.

Lost Vegas was translated into French and published by Inculte in May 2011.

McGuire's first novel, Jack Tripper Stole My Dog, was published in May 2011

McGuire is currently working on an "untitled" manuscript.